Synaptic impairment might precede neuronal degeneration in Parkinson’s disease. However, the intimate mechanisms altering synaptic function by the accumulation of presynaptic α-synuclein in striatal dopaminergic terminals before dopaminergic death occurs, have not been elucidated. Our aim is to unravel the sequence of synaptic functional and structural changes preceding the symptomatic dopaminergic cell death. As such, we evaluated the temporal sequence of functional and structural changes at striatal synapses before parkinsonian motor features appear in a rat model of progressive dopaminergic death induced by overexpression of the human mutated A53 T α-synuclein in the substantia nigra pars compacta, a protein transported to these synapses. SWATH-MS proteomics identified deregulated proteins involved firstly in energy metabolism and later, in vesicle cycling and autophagy. After protein deregulation and when α-synuclein accumulated at striatal synapses, alterations to mitochondrial bioenergetics were observed using a Seahorse XF96 analyser. Sustained dysfunctional mitochondrial bioenergetics is followed by a decrease in the number of dopaminergic terminals, morphological and ultrastructural alterations, and an abnormal accumulation of autophagic/endocytic vesicles inside the remaining dopaminergic fibres evident by electron microscopy. The total mitochondrial population remained unchanged whereas the number of ultrastructurally damaged mitochondria increases as the pathological process evolves. We also observed ultrastructural signs of plasticity within glutamatergic synapses before the expression of motor abnormalities, such as a reduction in axospinous synapses and an increase in perforated post-synaptic densities. Overall, we found that a synaptic energetic failure and accumulation of dysfunctional organelles occur sequentially at the dopaminergic terminals as the earliest events preceding structural changes and cell death. We also identify key proteins involved in these earliest functional abnormalities that may be modulated and serve as therapeutic targets to counterbalance the degeneration of dopaminergic cells in order to delay or prevent the development of Parkinson’s disease. 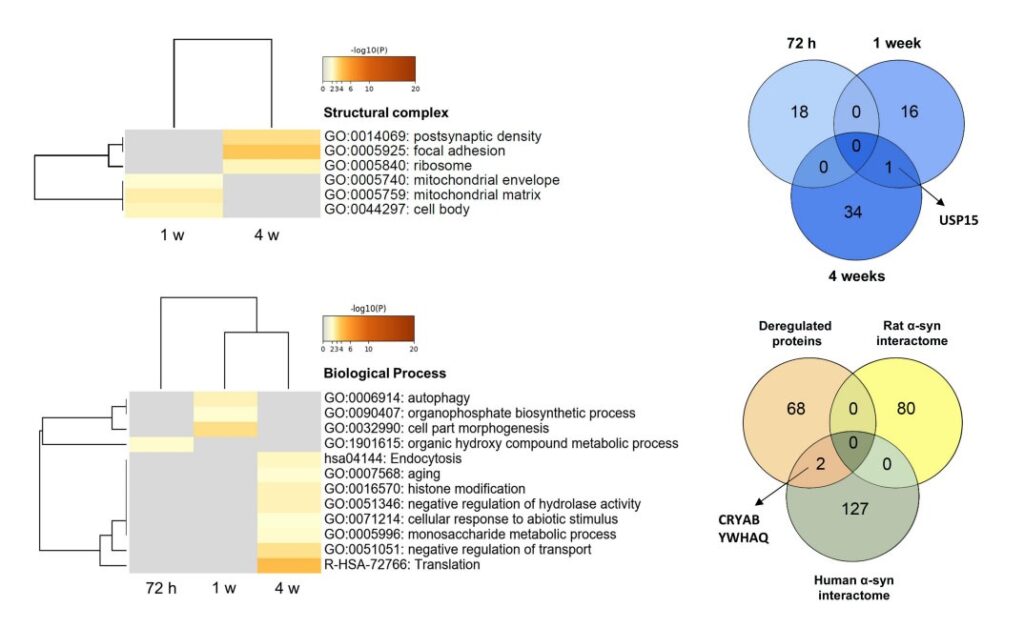